I recently made a trip out to Las Vegas with some of the 108 family along with their significant others.  Not only that, we also had the pleasure of having The Tainted Glove Podcast crew all join in on the shenanigans.  It was an epic 3 nights with King Nom, Queen Nom, Wally and Mrs. Wally, Aloha Mr. Hand, Yumper and Gerdy, Svo and Kelly, and K Fidds.  Naturally, many portions of the trip were documented, for better or for worse.  Here are some of the highlights that some of us may or may not recall.

As we all funneled in throughout the day the first big meetup point was at Caeser’s Sportsbook where we ran into Biguns, who also just so happened to be in town and cheering on his beloved Tarheels.  It was after these games ended that I noticed that the Modelos and Coors Lights were going down rather quickly and we still had lots of daylight remaining.  I may have been a little too amped upon arriving in Vegas and celebrating a Jayhawks Elite Eight victory.  Regardless, I powered through, the entire group assembled and we ventured out to Fremont Street and had a lovely experience at the oldest establishment in Vegas, Atomic Liquors.

This was my first time at Atomic Liquors and it lived up to the hype. Atomic Liquors has something for everyone. It was here that I chose to try some Vegas craft beers as they had a wide variety of food and drink options. My favorite beer here was “Peace, Love, & Hoppiness Pale Ale” from Big Dog’s Brewing, not only was it a great beer with a catchy name, the label being a tie dye design is right up my alley. With a very spacious outdoor seating area overlooking the mountains, Atomic Liquors has officially become one of my favorite spots in Sin City. 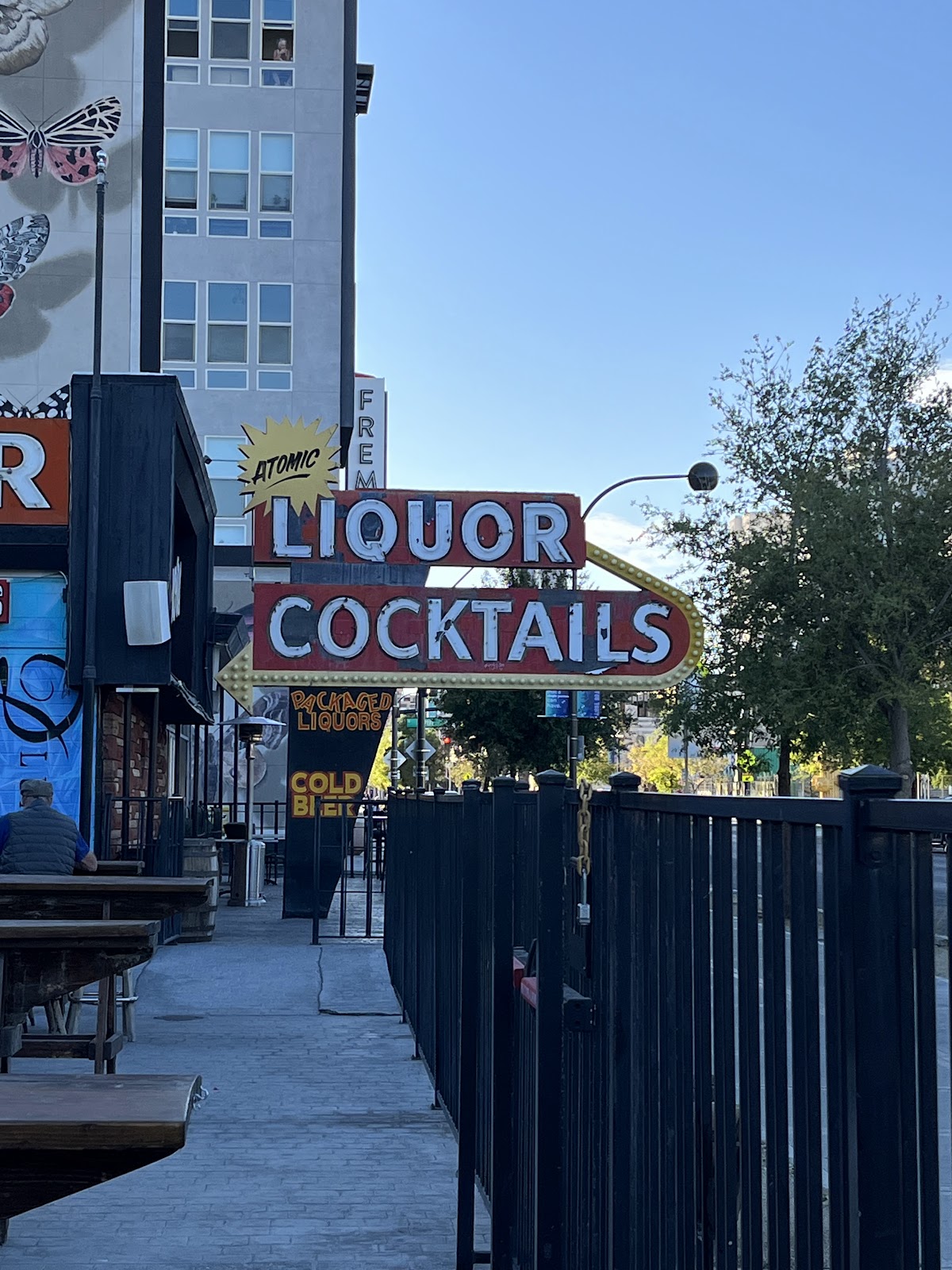 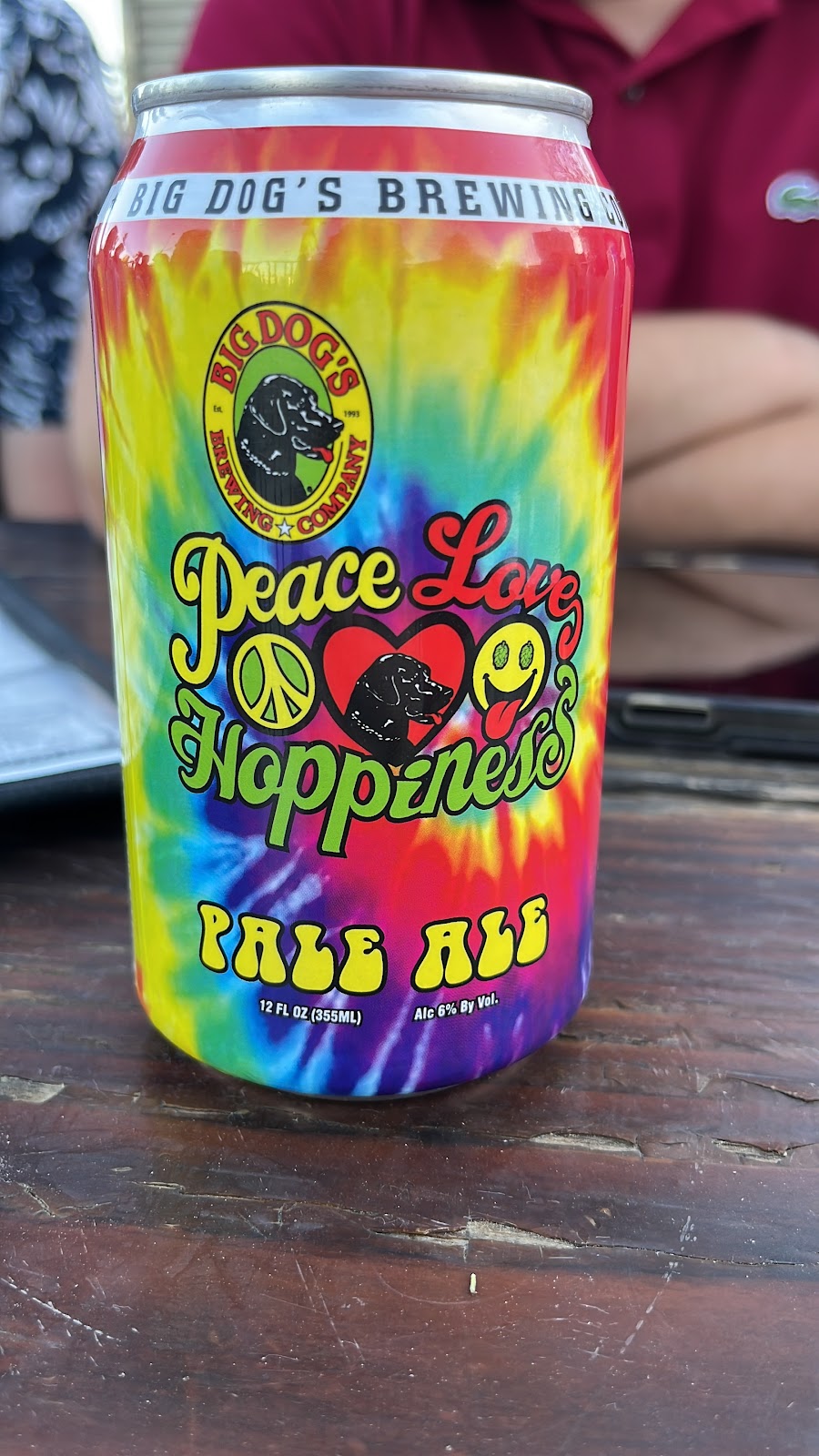 As the night progressed, I attempted an Irish Goodbye but was caught by Wally upon leaving. What happened the rest of the evening is not fully documented, but a copious amount of beers, shots, and cocktails were consumed. The one thing that was confirmed, however, was Wally transformed into Walter.

I’ll be honest, I scrolled through pictures and tried to recall what occurred on day two, however it was all a blur.  We gambled throughout the day, I can confirm that Wally woke up, and we had an incredible steak dinner at Ruth’s Chris Steakhouse.

I also ate the best chicken and waffles I’ve ever had!

I may have asked everyone in the group at least a dozen times where it was that we ate breakfast due to the fact I was still in a hungover haze and was just stumbling and following the group. It turns out we ate at Cafe Americano which is inside Paris hotel. It didn’t matter to me, I spotted the chicken and waffles on the menu, which included a honey sriracha syrup and I knew that would be the perfect thing to get me jump started for the day. 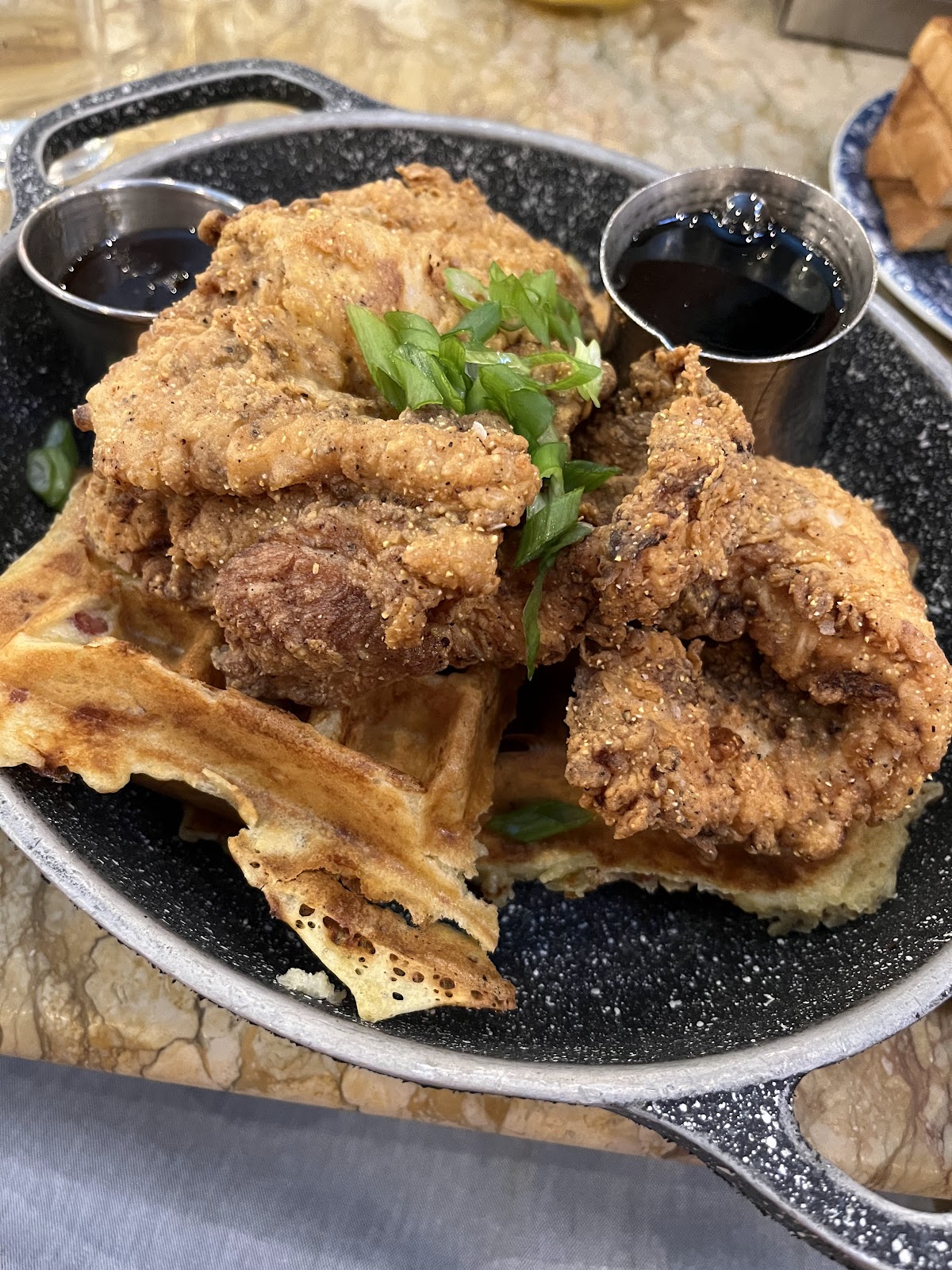 At some point if you ever go to Vegas, I highly recommend going to check out the Hoover Dam.  We had a dam good time and I would be damm’ed if I didn’t mention how dam fascinating this historic landmark is.  The views all around the dam are breathtaking.  (Note to self: don’t look directly down from the overlooks)

After some dam good R&R, everyone regrouped for a nice dinner, followed by an amazing trip out on Fremont Street in Downtown Vegas.  The next time you are in Vegas make sure to take the time to go visit Fremont Street, especially in the evening.  A street by name only, it is an awesome place to jam out to live music, visit the original casinos, as well as get some pizza at the famous Evel Pie. This is definitely one of my favorite areas of Vegas, we all had a blast, including Mr. Hand.

Evel Pie is a tribute to Evel Knievel and boasts the best slice of pizza in Vegas. However, it isn’t just about the pizza, Evel Pie provides a dive bar atmosphere with great music and friendly staff. Make sure you head there on your next trip to Vegas and order up a slice and beer. While you’re at it, pack a couple of 108 stickers to slap on the walls or behind the bar.

I had an incredible time with this crew and I’m looking forward to future adventures with the 108 family and friends.  Next stop: San Francisco in July.  Go White Sox!!

You can find me in the 108 all season long. Full season ticket holder since 2021. My Sox Summer is my Uncle, Chorizy is my God Father, Beef Loaf is my Grand Dad.