Editor’s Note: We asked our guy Luke to write up some beer reviews after he recited a soliloquy for his 2021 Wild Prediction on the #108Fest – The Hangover Show. We knew he had the chops to write for us. Thanks Luke!

Hello Friends and Fellow Beer Drinkers! Brew Hand Luke (@ltayor_22) here with a new beer review! This time I am bringing you a beer from Phase Three Brewing out in Lake Zurich.

This is a brewery that I recently discovered while doing my thing. From what I could find, it was officially established in 2019.  For a brewery that has only been around for two years, they are absolutely killing it. I have been very impressed with what I’ve had from them. One of their most popular beers is Pixel Density, and this is the DDH (Double Dry Hopped) , DIPA edition simply called DDH Double Pixel Density.  This hazy double IPA checks in at 8% ABV, dry hopped with twice the amount of citra hops as your standard Pixel Density.  #DDHDPD

Without further ado, let’s get to to the specifics and the official #108ing 10-80 scale for this beer:

Can/Label- 70/80: The can is very similar to the Pixel Density can with beautiful hummingbirds in pixel form.  This is a very simple, but also cool design where they have appropriately doubled the size and pixels of the hummingbirds.  It is very fitting to use hummingbirds as part of this artwork as the DDH Double Pixel Density is a sweet, juicy, nectar in its own right. 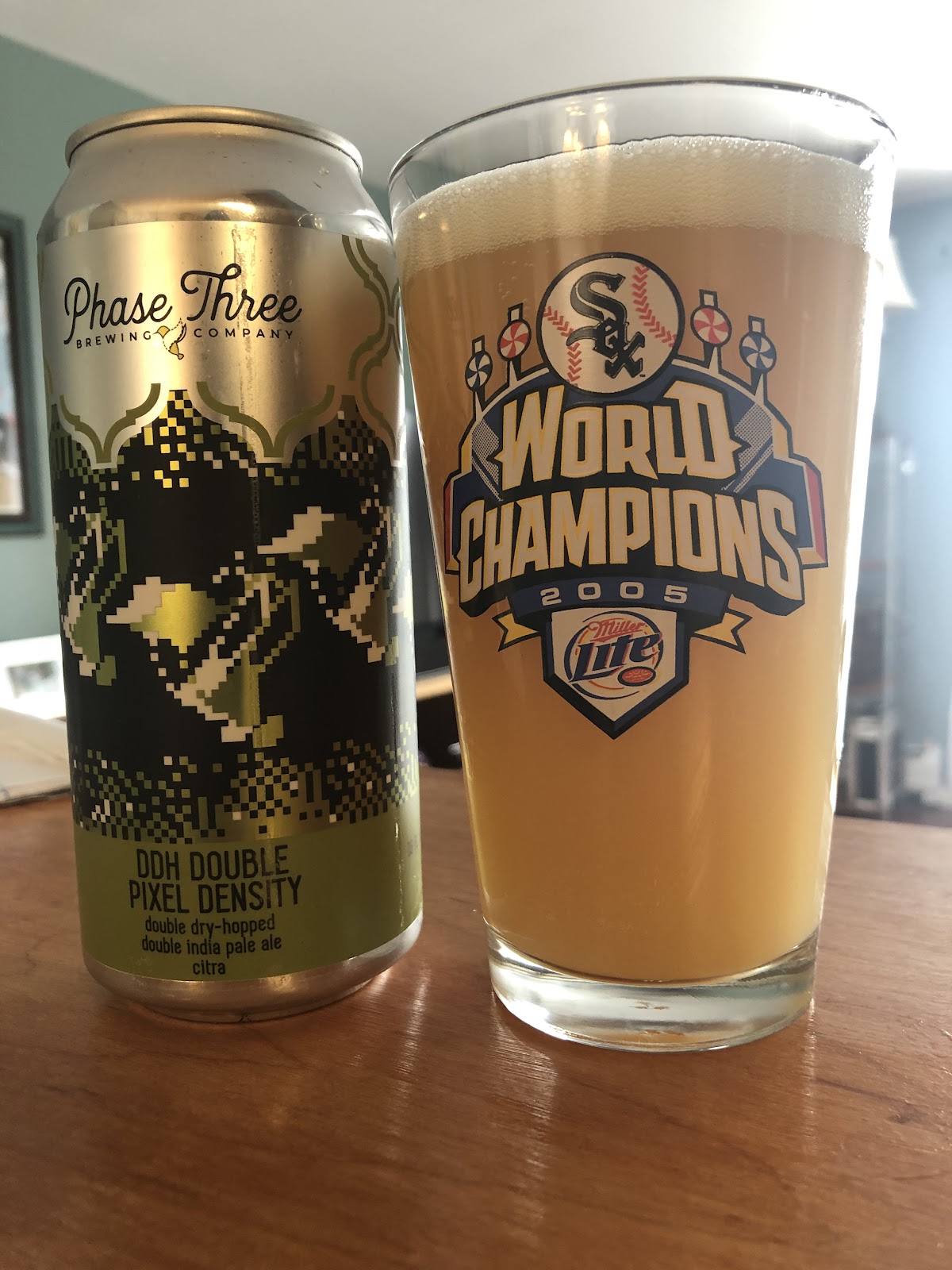 Appearance- 70/80:  For a hazy IPA this is exactly what I was hoping to see from the pour.  There is very much a #108Thicc type of haze to this beer with that golden/yellow color and roughly a one finger foam head on top (or 4 fingers if BeefLoaf is pouring).  I chose to pour this into a 2005 White Sox World Series Champion (GFY MAX / ESPN) pint glass and I am glad that I did. DDH Double Pixel Density is a championship level beer.

Taste- 75/80:  The citra hops are one of the most popular hops on the market for a reason, they’re fucking delicious and Phase Three doubled them up about as good as anybody could possibly do.  With a canning date of February 1st (assumed that is for snobs like MSS) it was also extremely fresh from the brewery so I was able to really get a good taste of all of the citrus and fruity flavors that come with a DDH Hazy IPA.

Overall Score: 72/80: If that number 72 seems familiar, it’s because this beer could potentially make its way to the Hall of Fame one day just like Carlton Fisk.  Be advised of the 8% ABV on this beer as it easily tastes much smoother and lighter than most 8% ABV beers.  At $16.99 for a 4 pack of 16 oz. cans it is well worth the purchase.  You can find DDH Double Pixel Density at your nearest Binny’s as well as several other liquor stores across the Chicagoland area.

Not sure if you have heard but we BROADCAST the podcast LIVE on our YouTube Channel! We even take questions! Make sure you subscribe for alerts when we go live.

Make sure you follow all of us on the Twitters using these fancy links! BeefLoaf • Chorizy • MSS

And if you’re looking for pics of us from the present and past, check out our Insta using this link!