Sox fans like to complain.  Every year on a certain message board you’d see a thread the day after opening day about all the complaints. “They changed the music!”  “Beer price is higher than last year!” “Why did the guy from Journey throw the opening pitch?” “LINES” “WORKERS” “BATHROOMS” “BUN WAS STALE”. You get where I am going.  So I am gonna predict things that we all will be bitching about the Monday after opening weekend.

1- WEATHER – Sox can’t control that, not yet anyways. We’re all in this together. Drink more and deal with it.  (That said weather might keep people away so maybe we won’t bitch about the next thing)

2- LINES AS FAR AS THE EYE CAN SEE – We all will bitch about the lines because we expect 40k people to stick to lines and to be ready when they get to the metal detectors.  So take you goddamn keys outta your pockets you drunk asses so we can watch the whole intro this year.  Guess what?  People are gonna want food and drinks too.  Guess what? They will all want them when the Sox are in the field.  Waiting till the 3rd, yeah, we all do that.  Drinking the amounts that we drink, we also piss.  A lot.  So expect lines.  Don’t go to the bathroom at the last minute, give yourself time.  And Sox, every year it seems like you forget that the game usually sells out for Opening Day.  Act like it.  SoxFest this year (opening ceremony on Friday) was a mess.  You can’t blame people for not following rules that you don’t enforce. You can’t blame the fans for lines (other than the jackwagons I mentioned above who ALWAYS forget their goddamn keys!).  I am hoping things go smooth, but expecting the worst.

4- THE INTRO SUCKS – More than likely it will.  Guess what?  If you are reading this you are more than likely a fan, which is short for fanatic.  We are the die hards.  We will go to the game even when they suck.  WE ARE NOT THE TARGET AUDIENCE. Once we cross from “casual” fan to “reading (or writing) blogs about the team on a daily basis” fan they won.  They got us.  They switch shit up to attract a new fan base.  One that has other clothing besides Sox related items.  Hell, BeefLoaf has a shirt that no one outside of 35th and Shields would even understand.  I am a fan and I didn’t get it.  Dude is hardcore about his shirts.  We both live in the hood too, so like it or not we’ll be there till we die or move to the ‘burbs. So if a dumbass intro attracts a new base that will bring in more revenue and excitement, by all means play Fall Out Boy.

I see the Sox hired Chance The Rapper as a “consultant”, ABOUT F’N TIME. Dude is from here and rocks the Sox hat ALL THE F’N TIME. Plus he makes music that MILLIONS like.  Dude was on SNL, what TV show were you on?

Think of Opening Day like a first date for the Sox.  They pull out all the bells and whistles for that new girl. It’s only 3 months later that you realize that you got involved with a crazy person!  That is when you see the Sox true colors.  Hell, one Monday last year I was WAITING in a line with less than 10k at the game.  That is just pathetic.  But ya know what?  I like cheap tickets and I like cost effective food and drinks.  I will put up with a little hassle to keep that game going.  ONE TIP – If I see you yelling at staff for an issue that is beyond their control I will say something.  These people do a shit job, for shit pay and don’t need to take your shit too.  Take a boxing class to get out your aggression, don’t yell at a person making minimum wage, working far too hard for it,  especially when they aren’t given the tools to achieve perfection.  You do this to my favorite italian beef ladies (Evelyn and crew) I will smack ya.  Those ladies are lovely.

Here are the odd balls.

5- JOHN DANKS PITCHING – If he would have pitched in Oakland, and we got Sale on Friday, some would be happy.  Others would say that we should have used the actual rotation that we are gonna use for the whole year and F those guys who only show up on Opening Day expecting to see the best pitcher we have.  Look at it like this, John Danks will be gone someday.  Let the guy have his moment this year.  It’s just 1 of 162 games.  Come back Saturday to see Sale and get that sweet hat they are giving away. 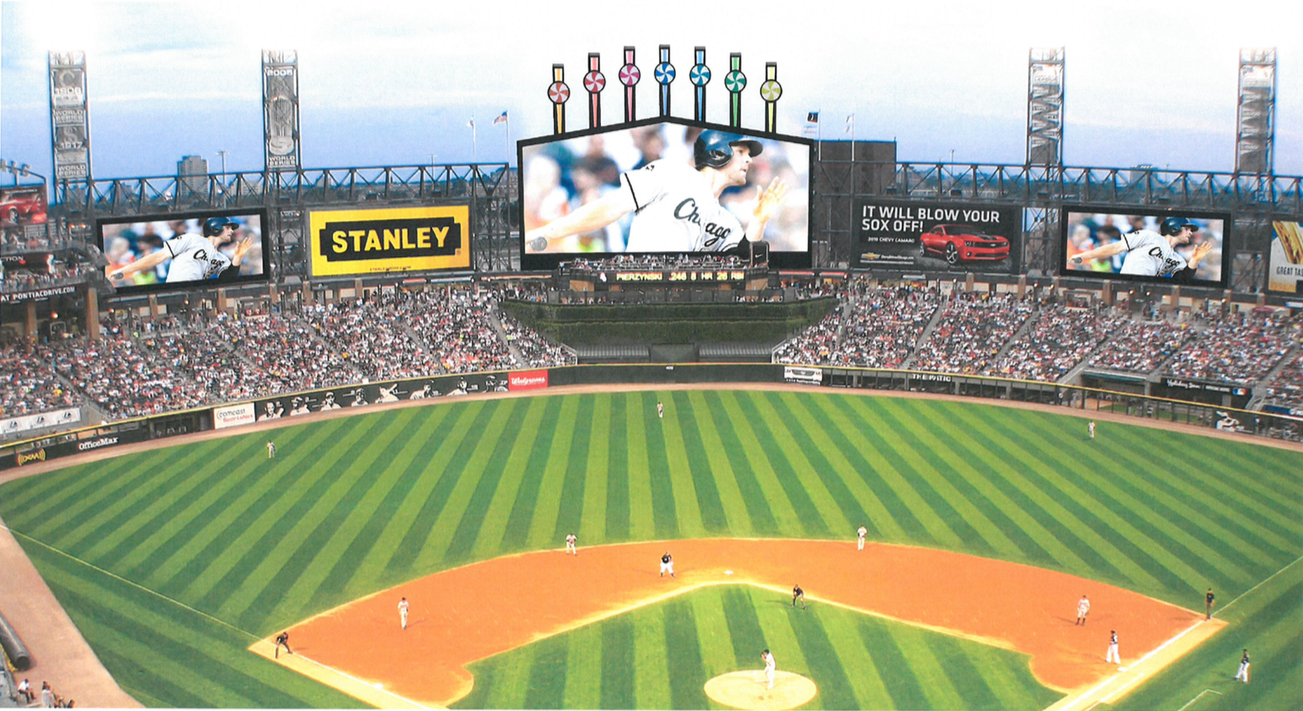 6 – SCOREBOARD IS TOO BIG / TOO LOUD – For years we have bitched and bitched about the scoreboard screen being small.  Guess what?  THE WHOLE EFF’N THING IS A SCREEN NOW.  Guess what?  People are gonna miss the old school look.  It’s gonna happen.  We’ll complain because deep down we know we don’t deserve this marvel of electronics.  But we do friends, we do.  I am hoping for lasers.

7 – INTRO SONGS IN SPANISH – Guess what?  Most of the guys on the field DON’T SPEAK ENGLISH. Take it easy Trump, they PAY THEIR TAXES, but they don’t know the language. I for one don’t give a shizz if they do or don’t, as long as they can hit the ball a country mile. The world extends beyond the suburbs, trust me.  Many people in the world don’t speak English, but they are really good blokes.  So enjoy the popular music of Cuba or the DR, and sip a Corona from a can.  It might warm ya up.  Who knows?

8 – SO AND SO DIDN’T SIGN MY BLAH, BLAH, BLAH – When the crowd is smaller on Sunday, you will have the autograph hounds out there.  You know, when I am trying to get focused at work, I love to sign multiple items for grown ass men and women who maybe in turn will sell it on Ebay.  That is how I get focused.  So give these guys a break, buy an autograph if you want one.

9- PEOPLE WILL JUST BITCH ABOUT HOW IT USED TO BE AND HOW IT WAS BETTER  – That’s it. Can’t argue with this people.

Nine is my favorite number so I am gonna end here. I could go for days, but I won’t bore you with my rants today, I will save them for a video some day.  See you Friday, Saturday AND Sunday.  Unless my wife goes into labor, then you will only see me Friday and Saturday. Can’t miss Sale’s first start.